Swiss pharmaceutical giant Roche recently received the breakthrough therapy designation from the U.S. Food and Drug Administration (FDA) for its gantenerumab Alzheimer’s treatment, in a development that could spark a new level of research and drug development against the disease in Europe. Gantenerumab, which is currently undergoing Phase III trials that are expected to conclude in the second half of 2022, works by neutralising beta-amyloid plaques that are considered behind the death of brain cells causing the condition. Once fully approved for use, the drug could be the first one capable of at-home administration and would mean a major breakthrough against Alzheimer’s on a global scale.

The designation comes months after Roche, Europe’s largest pharmaceutical company by sales, had seen a substantial stake being acquired by SB Management, the specialised investment arm by Japanese banking and finance conglomerate SoftBank Group, earlier this year. Valued at $5 billion in August, the investment was led by former Deutsche Bank trader Akshay Naheta in a move away from SoftBank’s recent focus on pharma and biotech start-ups, to established, large pharma companies.

Although Naheta’s Roche investment decision was largely focused on the firm’s Genentech division, which SoftBank considered to be undervalued, the breakthrough designation is set to massively strengthen SB Management’s position in Roche, which already saw rapid growth as Roche’s stock prices went up upon the FDA’s announcement.

Indeed, the breakthrough comes at a time when the number of people suffering from Alzheimer’s and dementia, it’s most dreaded symptom, is steadily rising. According to the OECD, around 9 million people were living with dementia in the EU in 2018, an increase of almost 3 million compared to the year 2000. As the European population grows older, the prevalence among those over 60 years of age is only set to rise over the next decades.

In light of the recent FDA announcement and the daunting projections of Alzheimer’s prevalence, the pressure is on EU policymakers to take the fight against what has been described as a “one of the 21st century’s major social, medical and economic crises”. Brussels has been criticised for being ill-prepared to deal with the disease in earnest in recent years, with  NGO Alzheimer Europe warning most recently that the EU is lacking adequate medical infrastructure that will likely hinder the roll-out of new treatments like gantenerumab as they are increasingly becoming available.

There is also a need for the European Medical Agency (EMA) to speed up approval processes, especially in comparison to the FDA. Last June, the FDA granted accelerated approval of Biogen’s Aduhelm (aducanumab) for treatment of Alzheimer-induced dementia. The drug is currently undergoing evaluation by the EMA, though no approval date is known. Adopting a similar fast-track process could contribute to rapidly expanding the European Alzheimer treatment space and encourage further research to bring more solutions to patients as fast as possible.

All this is not to say that the EU has been standing idly by when it comes to Alzheimer’s research. On the contrary, it has been supporting research for years. In 2014, its Innovative Medicines Initiative saw neurodegenerative diseases and age-associated diseases elevated to the priorities of the Strategic Research Agenda. The European Parliament too has provided policy debates on how to achieve more effective sharing of research data across the Union as recently as February 2021. If fully implemented, research and sharing innovations could very well allow the EU to finally reap the benefits of its multitude of research priorities.

The success of Roche and Biogen, as well as the massive investment opportunities they have provided to the likes of SoftBank and others, is indicative of the fact that the time is ripe to elevate the anti-Alzheimer fight to the next level.

With thanks and praise, Germany's President Frank-Walter Steinmeier said goodbye to the Merkel government, stating her chancellorship was formative for the image of Germany in the world. Steinmeier also emphasized 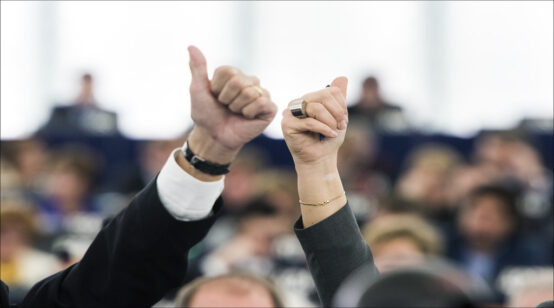 The Mayor of Paris, Anne Hidalgo, will run as a candidate for the French Socialists in the 2022 presidential election. The decision in favour of the 62-year-olds was made on