EPP, PES Fail to Win Majority in EU Parliament Elections for the First Time in 40 Years

The two largest centrist EU parties have lost the largest number of seats.

The two largest EU party families, the center-right European People’s Party and the center-left Party of European Socialists, have emerged as the losers from the 2019 EU elections: both have lost seats, and for the first time in 40 years, their combined total number of MEPs is not enough for forming a coalition with a majority in the new European Parliament.

Some 427 million voters from across the 28 EU member states were eligible to vote in the 2019 EU Parliament elections held between May 23 and 26.

A total of 376 seats are needed for a majority in the 751-seat European Parliament, including the seats of the UK, which has elected its own MEPs once again as the EU granted it a second extension on Brexit, with October 31, 2019, as the deadline.

According to the projection, the European People’s Party remains the largest group in the EU Parliament. However, it is projected to have only 173 MEPs, down from 221 seats in the 2014 – 2019 Parliament.

The center-left Party of European Socialists is projected to have 147 seats, down from 191.

The centrist Alliance of Liberals and Democrats for Europe, including French President Emmanuel Macron’s “Renaissance” movement, is emerging as the third largest group, with 102 MEPs, up from 67 seats in the 2014 – 2019 Parliament.

The Greens / European Free Alliance have also made substantial gains, with 71 projected seats, up from 50 in the previous parliament.

The European Conservatives and Reformists have gone from being the third largest group, with 70 MEPs, to being only the fifth largest, with 58.

A newly emerging Europe of Nations and Freedoms group is ranked sixth, with 57 projected votes.

Next is the Europe of Freedoms and Direct Democracy group with 56 seats, up from 48.

The Confederal Group of the European United Left – Nordic Green Left comes eighth with 42 MEPs, down from being the fifth largest group with 52 votes.

A total of 8 MEPs are listed as unattached members, and 37 as “Others”. The formation of a parliamentary group in the European Parliament requires at least 25 MEPs coming from at least 7 different EU member states. 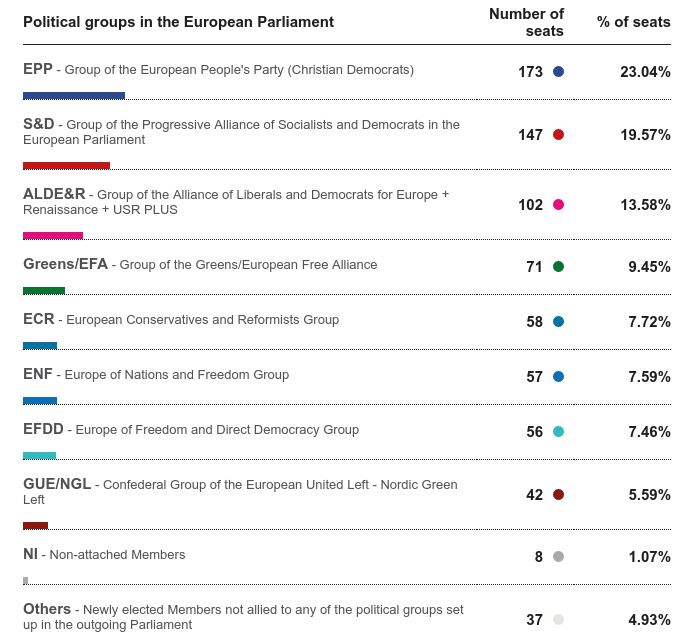 On the second major day of protests against the planned pension reform, strikes paralysed large parts of public life in France. Trains, buses and flights were cancelled nationwide,

After much back and forth, the Patriot air defence system will now be stationed on Polish territory. The opposition sees the credibility of the government in Warsaw as