Germany’s Power on the Rise, Britain and France’s on the Wane, Finds Poll in 10 EU States

The EU is mostly credited with promiting peace and stability but the EU institutions in Brussels have a rather negative image, according to the respondents.

Germany’s influence in international politics is perceived as rising while those of the UK and France are deemed to be waning, according to the results from a Pew Research Center survey in 10 EU member states.

The poll has also discovered that Europeans continue to give the European Union credit for peace and prosperity across Europe but consider the EU leadership in Brussels to be out of touch with the Union’s citizens.

The survey’s results were announced by the Pew Research Center on Tuesday. The poll itself was conducted among 10,112 respondents in Greece, Germany, France, Hungary, Italy, the Netherlands, Poland, Spain, Sweden, and the UK from May 24 until July 12, 2018.

“There is a sense in Europe that while German power is on the rise, French and British power is stagnant or in decline,” Pew Research Center said.

It found that a median of 47% think Germany is playing a more important role in the world than it was 10 years ago,”

In the Netherlands, France, Sweden and the UK, publics are divided on Germany’s world position, with roughly equal shares saying it has become more important or has remained the same.

The lowest ratio was in the UK, at 21% deeming Germany to have become more powerful in international politics. 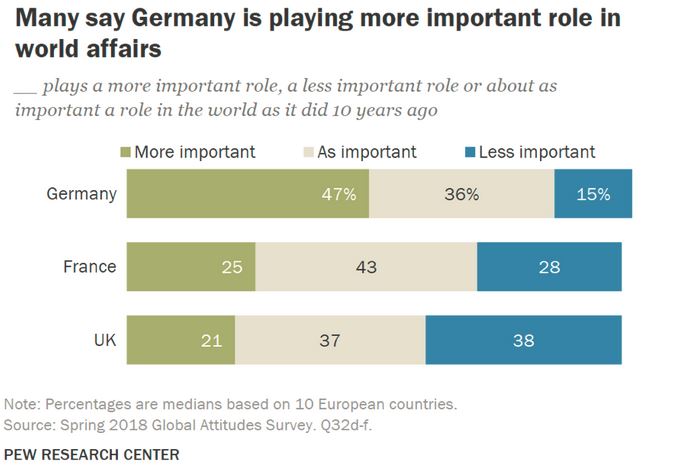 “Across the 10 EU nations surveyed by Pew Research Center, a median of 74% say the EU promotes peace, and most also think it promotes democratic values and prosperity,” the pollster pointed out.

“However, Europeans also tend to describe Brussels as inefficient and intrusive, and in particular they believe the EU is out of touch – a median of 62% say it does not understand the needs of its citizens,” it elaborated.

On the whole, respondents in Germany and Poland (at 49% and 42% respectively) are found to be the least disgruntled with Brussels.

The EU institutions in Brussels receive the highest ratings in Poland and Spain, and the lowest in Greece and the UK.

In addition to financial and economic future, concerns about migration top the list for the respondents in the 10 EU countries surveyed.

“There are also strong concerns about immigration in some countries. Majorities or pluralities in most nations want fewer immigrants allowed into their country,” Pew Research Center said.

“Many believe that immigrants tend to remain distinct from the broader culture and that immigration increases the risk of terrorism,” the pollster pointed out in its detailed survey report.

EU nutrition debate enters the next round

The Czech Republic has assumed the Presidency of the EU Council at a critical moment for the bloc, which is struggling to find answers to the conflicting demands posed by